Tanzania is an extraordinary country, home to several large and ecologically significant nature parks and reserves, as well as a number of archaeological and historical sites. This is why you have to be clear on what you will like to during a holiday or safari in Tanzania, because there are dozens and scores of enchanting places.

Tanzania is one of the richest and most beautiful parts of Africa, where you can find beautiful islands and pristine Savannahs, or get in touch with the indigenous tribes and wildlife of the area. It is a land reflective of the colours of its flag: the green of the tropical forests, the yellow of the Savannah, the blue of the islands, and the black for Black Africa.

The 10 most beautiful things to do in Tanzania

It is impossible to list all the parks, reserves and most beautiful places to visit on a safari in Tanzania. It will require the writing of several books. You will find below the top 10 places, the 10 most beautiful sights you must visit and see with your own eyes during a safari or trip to Tanzania.

Snorkel or scuba at Zanzibar Archipelago

When deciding what to see in Tanzania, you should know that this land is not only famous for its parks and the wonders of its mainland, but also for the many islands and archipelagos that surround it. The Zanzibar Archipelago is one of the most beautiful seaside resorts in the world comprising two dream islands: Unguja or Zanzibar, and Pemba.

This archipelago is characterized by beaches of fine white sand, beautifully collared waters and crystal clear atolls of immense beauty. It is a perfect place for those looking to relax, and who also enjoy beaches, underwater activities, and giant turtles which nest on the beaches of the archipelago to reproduce. 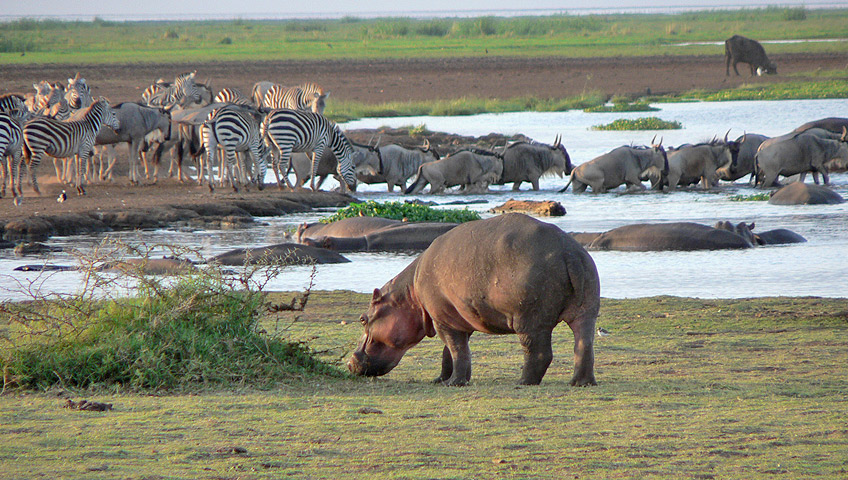 Although Lake Manyara National Park, most commonly known as Lake Manyara, is one of the smallest in Tanzania, there’s plenty to see here! Ornithologists will be delighted by the extraordinary variety of bird species that frequent the park, including huge flocks of water birds, flamingos, and storks, making this park a favourite destination for birdwatchers.

That said, one of the main reasons why a lot of tourists visit this wonderful park is to actually witness African lions climbing up trees. These wonderful creatures are incredibly elusive, the spectacle is however guaranteed for the lucky few who get to see them! 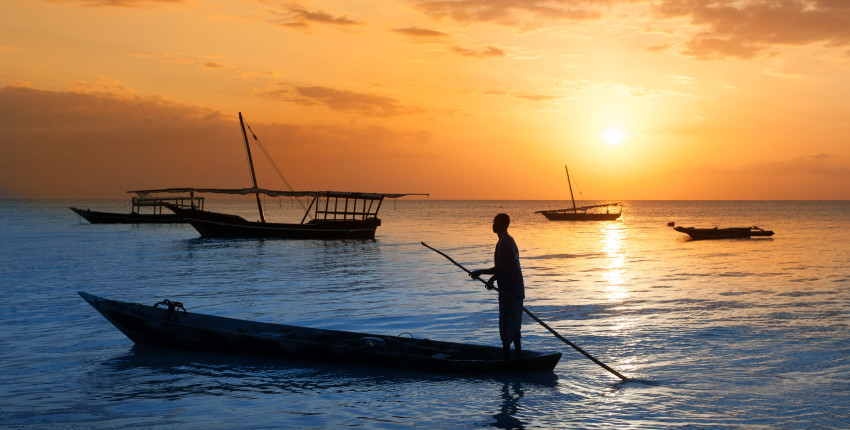 Created to help protect one of the richest marine habitats in the world, the Mafia Island Marine Park is a paradise for both scuba divers and beach lovers.

The park consists of a number of important marine habitats, including mangrove ecosystems, sea-grass beds, coral reefs, lagoons, and forests. You can either unwind on sandy beaches or spend your days underwater with some of the most beautiful marine species you can ever see! 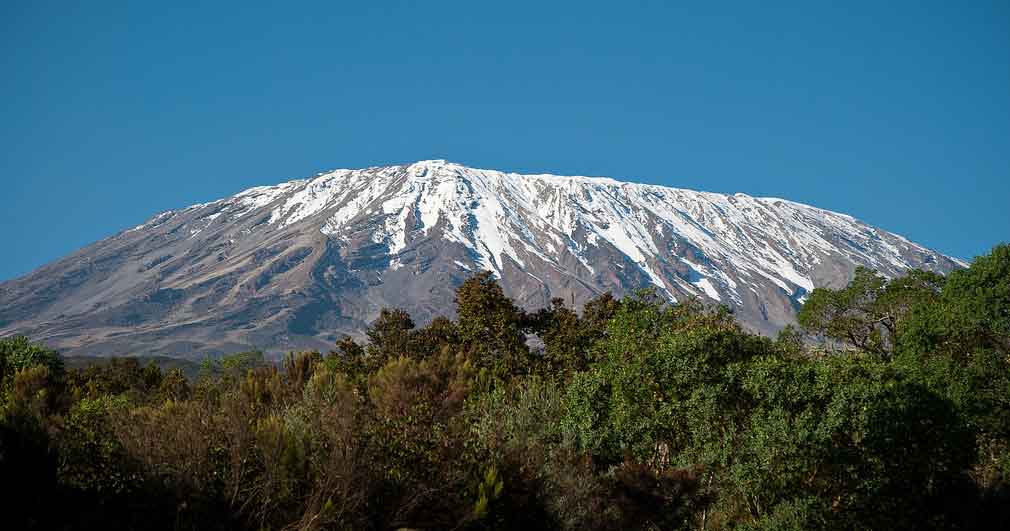 Mount Kilimanjaro is the highest peak in Africa – images of its snow covered peaked are famous all over the world. There is the possibility for those who are physically fit and looking for adventure to climb this spectacular mountain, surely not to be attempted by the faint of heart!

The walking and hiking trails in Kilimanjaro National Park offer a great alternative for those who want to take things slower. Whatever your choice, seeing Mount Kilimanjaro up close is a huge treat!

Go on safari in the Ngorongoro Conservation Area 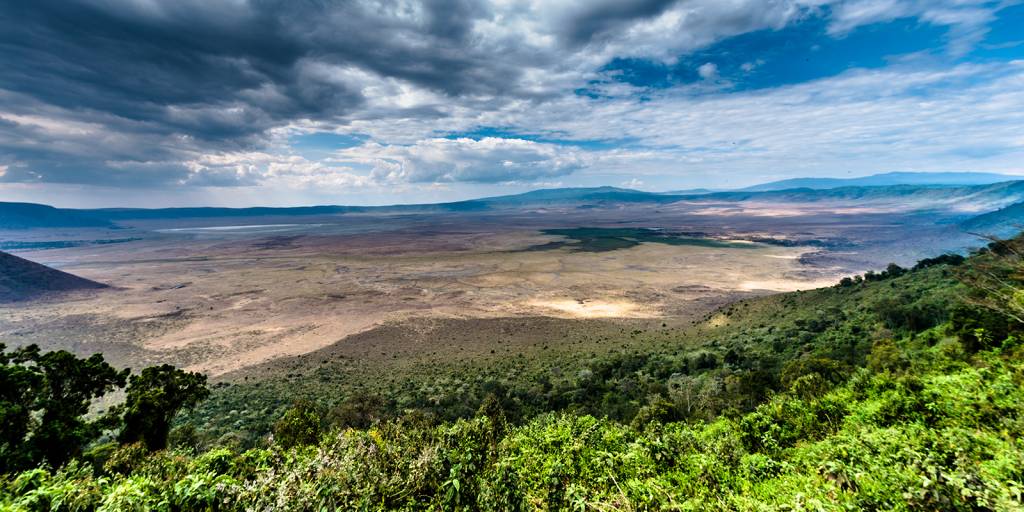 The Ngorongoro Crater is probably Tanzania’s most famous symbol, and it is often considered as one of the lost wonders of the world! Created when an exploded volcano collapsed on itself about two or three million years ago, the crater is about 2,000 feet deep, covering an area of about 300 km2, and is incredibly impressive.

The view from the top is breathtaking, a descent into the crater is an adventure in itself, and once at the bottom of the crater, you are in the ideal position to find some of the 30,000 or so animals that populate the crater. What more could you ask for?

And think that the crater is just one of many reasons that make the Ngorongoro Conservation Area such a coveted destination, especially during safaris.

The Selous Game Reserve, also known as the Selous Hunting Reserve, is the largest wildlife sanctuary in Africa, together with the Mikumi National Park, home to over 1,000,000 large mammals in the region, including some of the world’s largest populations of African wild dogs, elephants, crocodiles, buffaloes and hippos.

You can also see other African animals such as the black rhinoceros, an increasingly endangered species that is part of the big five.

Go on holiday in Serengeti 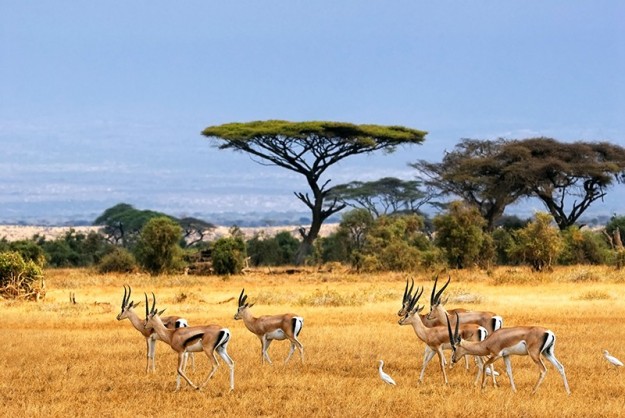 The Serengeti National Park is home to the annual migration of wildebeests, one of nature’s greatest phenomena. Over a million animals make the annual trip through the Serengeti to the Masai Mara in Kenya – watching the rush is a highlight for any nature lover.

Should your visit not coincide with migration, there is still plenty to keep you busy. The park is home to a wide variety of birds and animals, including the big 5!

You may want to try a fantastic alternative like a hot air balloon safari if you are interested. Flying quietly over the open plains gives you a completely different perspective – it’s out of this world! 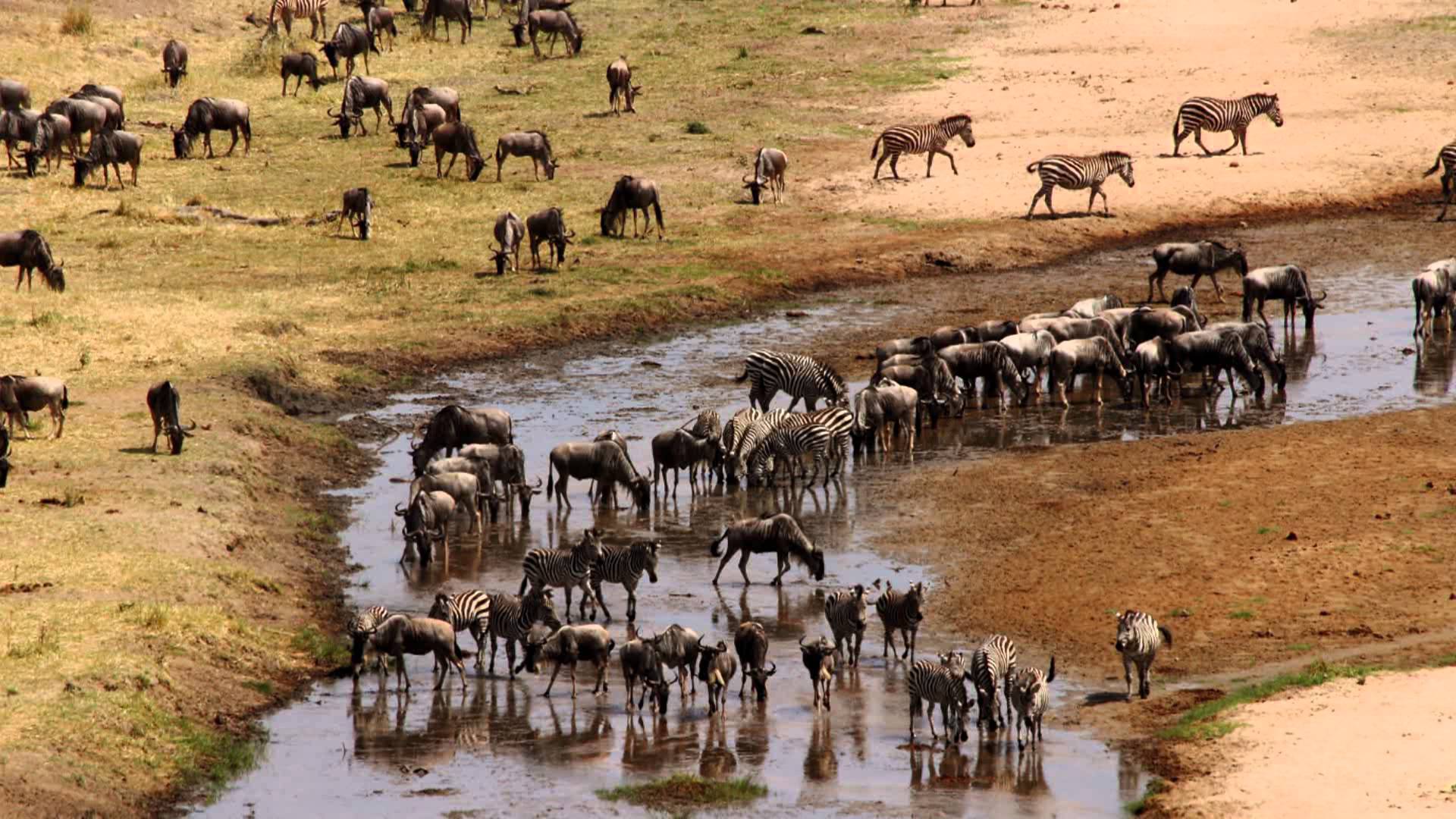 The Tarangire National Park is one of the best places to visit if you want to see elephants, as it has the highest density of the species in the whole of Tanzania.

As with the elephants, Tarangire National Park is also home to the great buffaloes, giraffes, and a number of antelope species such as the greater kudus, as well as african lions, to name but a few. The park boasts its own annual migration which has been estimated to include up to 3,000 elephants, wildebeests, and between 25,000 to 30,000 zebras – a fascinating spectacle if you get the timing right!

Part of the eastern mountain arch, the Udzungwa Mountains are home to beautiful flora and fauna. The park is an ideal destination for hiking, offering visitors the opportunity to follow its natural environment more closely. The park has a variety of mapped trails of varying lengths and difficulties that cater to all levels. Paying a visit here is a unique experience, giving you the distinct feeling of exploring an uncharted territory! 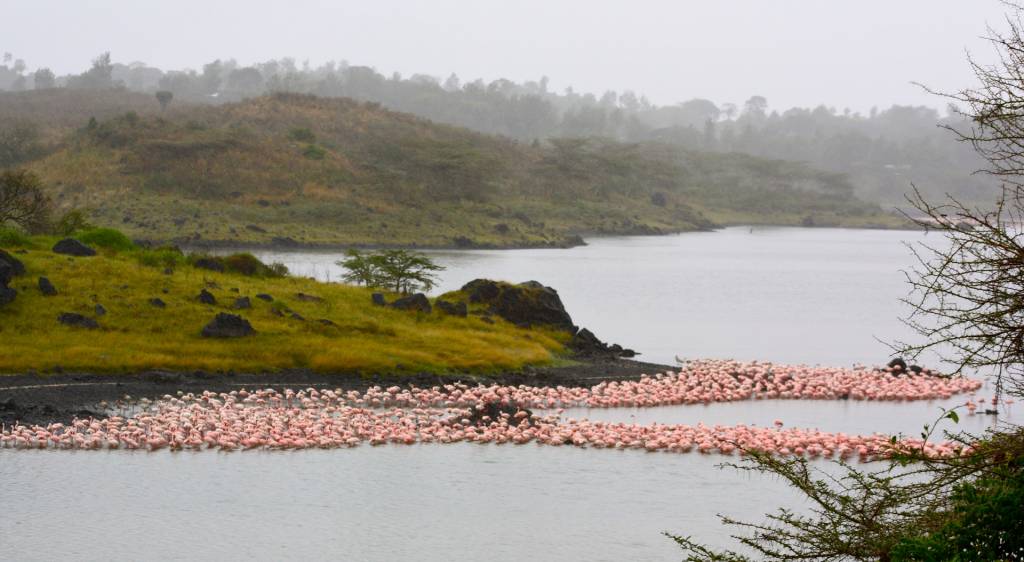 Last but not least is the Arusha National Park, one of the most important parks in Tanzania from which we begin most of our itineraries. It is an ideal destination for photo safaris, thanks to the presence of several animal species. Arusha is surrounded by a rainforest with breathtaking landscapes.

Choosing Safari Avventura as your safari tour operator will also give you the opportunity to get in touch with the Masai people, an indigenous tribe that still live in this land.

These are of course just some of the must-see attractions in Tanzania, but they are without doubt the highlights of any safari. To discover all the other beauties and peculiarities of this land, we can only recommend a safari: one of the most beautiful experiences of your life. 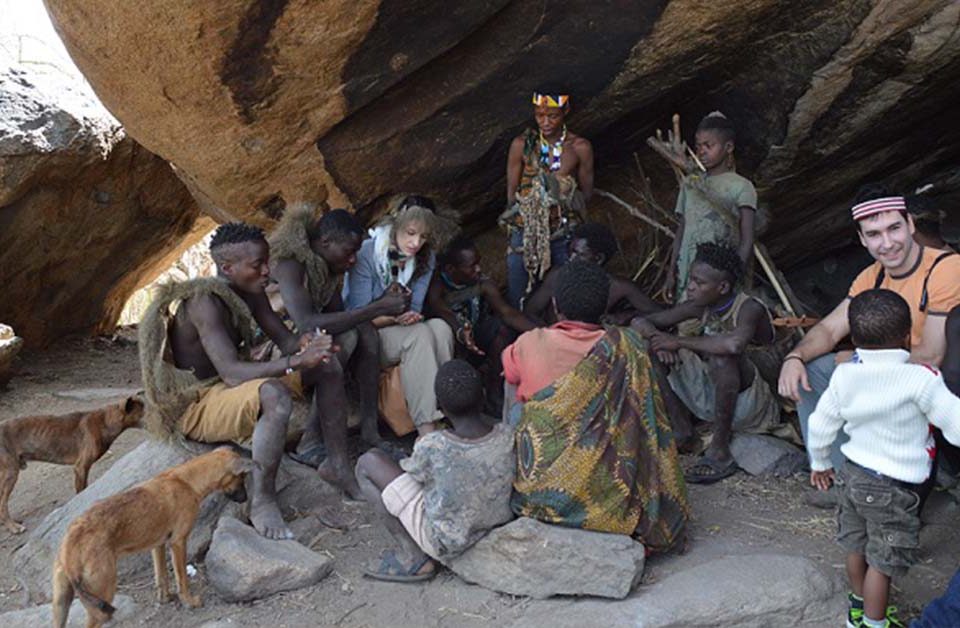