Zanzibar Archipelago: discover the islands and our holidays

Zanzibar is one of East Africa’s most famous and evocative seaside resorts, often used to reference the entire Zanzibar archipelago, located in Tanzania. The archipelago consists of about forty smaller islands and two main islands, including two other beautiful seaside resorts in the area: Unguja, the largest and most populated, often simply referred to as Zanzibar or Zanzibar Island, and Pemba.

The Zanzibar Archipelago, together with Mafia Island, constitutes part of the spice islands, as they were central to the Spice Route.

The turquoise waters bordering the island are ideal for snorkelling and diving for the beautiful corals and offshore wrecks. The public gardens by the sea are home to two of the city’s most significant buildings, the Arab fort, and the Palace of Wonders or Bit-el Ajab.

Zanzibar and the archipelago of the same name is located on the frontal coast of Tanzania, in the blue Indian Ocean, about 20 km off the African coast. Unguja Island, also known as Zanzibar, is one of the southernmost islands of the archipelago.

Which islands make up the Zanzibar archipelago?

The two main islands, those much larger in size, are Unguja and Pemba.

The former, given its size, is commonly identified with the name of Zanzibar, although this is actually the name of the entire archipelago. Unguja is a hilly island located at Bagamoyo, a town in Tanzania. This island is highly frequented by tourists, especially its eastern coast with its white beaches and coral reefs in front, one of the most beautiful places for divers and others.

Pemba Island, on the other hand, also known as Green Island, or Al Kuh Dra, is located about 50 km above Unduja, and is about half the size of Zanzibar Island. Pemba is one of the jewels of the Indian Ocean, surrounded by the coral reef, which is home to 300 species of fish and corals. You can watch as sea turtles lay their eggs on Mnemba’s beach from December to March. Chumbe is also a real jewel located on a bed of coral fossils, and is one of the most beautiful destinations on the island.

The archipelago’s islands were originally covered by rainforest. Today, however, the soil has been almost completely deforested to make room for fragrant plantations of spices and fruits. 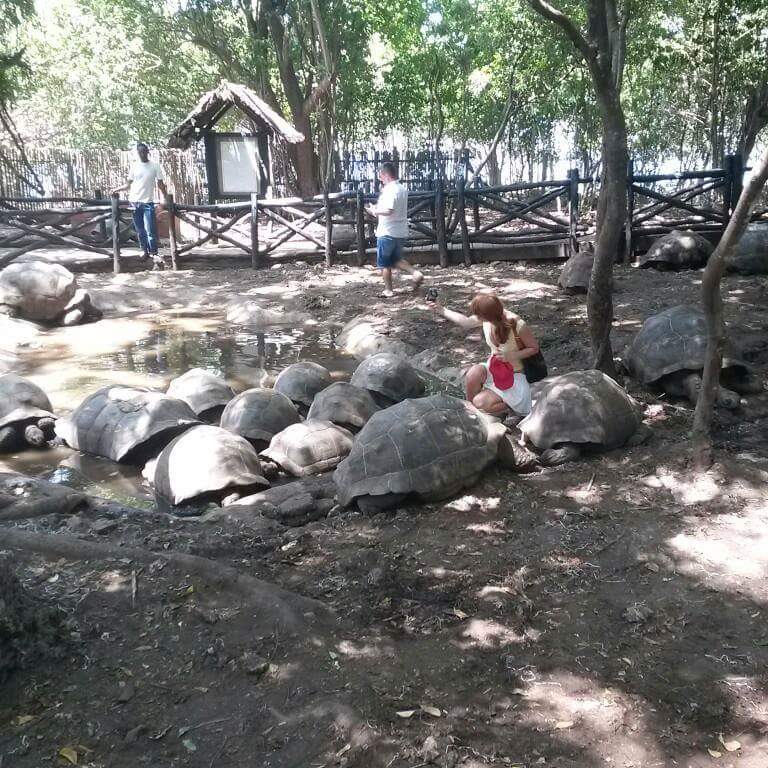 For an excursion, you can easily reach a tiny Prison Island in front of the city, where slaves were once imprisoned before being shipped out of Africa, which is now a shelter for giant land turtles. North of Stone Town are the most beautiful and popular beaches of the island, and 5 km from the capital are the ruins of Mtoni Palace built in 1820 by a wealthy Arab merchant, the first person to introduce the cultivation of cloves, which has become a source of wealth for the island.

The entire area around the island is covered with lush vegetation, and is the starting point for most tours and safaris. The area to the south of the city is called Mwanakwewke, or “load the child on the shoulders”, because it was once often flooded by torrential rain. Also to the south is the botanical garden and the archaeological site of Unguja ukuu, which is now only a small village, which once comprised a 16 hectare settlement, with finds dating back to 300 AD. Still south of the island is Jozani naturalistic forest, a beautiful tropical forest of 2495 hectares.

Diving in Zanzibar is mainly carried out in the northern area around the tip of ras nungwi, and in the fantastic marine parks of Mnemba and Chumbe islands