Tarangire National Park covers an area of 2,600 square kilometres, and is dotted with enormous baobabs, spectacular trees of incredible dimensions (they can reach heights of up to 25 m), particularly long-lasting and resistant with bloated trunks and bizarre, often bare foliage that looks very much like a root system. Though an iconic African tree known all over the world, it is also a source of food and medicine for locals, and is considered sacred by many tribes.

Flora and Fauna of Tarangire Park 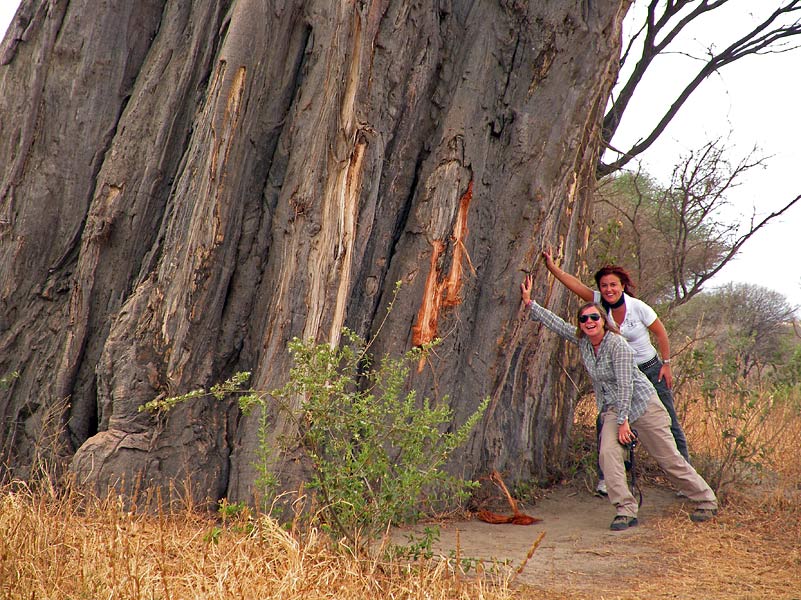 Tarangire Park, unlike other parks such as Serengeti, has landscapes that tend to be more lush, due to the presence of the Tarangire river that runs through it, around which you can find lush alluvial plains, woods, forests and marshes. Peculiar to this park is the presence of two trees: the baobab, being the park with the highest number of these specimens, and the umbrella acacia, known as Acacia Tortillis.

Migrations are one of the most popular features of this park, and migration flows determine the presence of different animals depending on the time of year in which we are. We usually recommend visiting the Tarangire during the dry season, as there is a higher concentration of animals in all of Tanzania’s parks during this period. During the dry season, usually from August to October, Tarangire Park hosts a mass migration of wildebeests, zebras, antelopes and elephants, concentrated mainly around the remaining pools of water in the river.

In addition to these animals, you can also see alcelaphus, cudus, dik-diks, over 500 bird species, and even some of the most enchanting felines, such as African lions and cheetahs, in Tarangire National Park.  Elephants, in particular, have a very high presence throughout the year, and it is easy to find them in groups, even at a very close proximity.

Tarangire National Park is also known as the Park of the Giants, thanks to the presence of huge specimens in both its flora and fauna, such as baobabs and elephants.

The Migrations in Tarangire

Tarangire National Park is unique for its river with the same name that runs through it, serving as the only source of water during the dry seasons, resulting in the massive migratory flows of hundreds of different animal species, similar to those experienced in Serengeti National Park and the Ngorongoro Conservation Area.

At the height of the migration, the landscape is filled with every animal species typical of the northern circuit: Cudus – greater and lesser, ostriches, warthogs, impalas, lions, leopards, cheetahs and many other animals. Elephants stand out among these, reaching their highest concentration in Tarangire. You can see between 500 and 1000 elephants every day: a spectacle that fills your heart.

The trend is reversed during the seasons of heavy and light rains, which cause most animal species to drift away, moving towards Ngorongoro, Lake Natron and Lake Manyara, where the pastures are now lush again, accompanied by renewed water supply.

We at Safari Avventura consider the Tarangire National Park a must-see destination for all our safaris in Tanzania. This is why we have included it in all our itineraries, including the group safaris we offer, because of its uniqueness and the sheer number of animals that can be found there.

The most popular routes in the park are certainly those that wind along the river, where you are more likely to see a majority of animals. Also of interest, and only in the dry season, are the southern swamps that feed the Tarangire River, where thousands of buffaloes and elephants go in search of cooling mud. Outside the park, you can make an interesting excursion to Lake Burunge, marked by shores dotted with the characteristic plants of euphorbia candelabrum, and shallow alkaline waters; an ideal place for flocks of flamingos between July and November. Moreover, during the dry season, the shallow depth further reduces the width of the lake, which then becomes for the most part an extensive salt crust.

The flora and fauna of the Tarangire National park varies according to time of year. The Tarangire River is in fact the only source of water in the surrounding area during the driest periods, leading to a massive migration to its aquifers, which dissipates during the remaining months. A visit to the Tarangire is a must during this period, as well as during the other months, when it is possible to see enchanting and breathtaking landscapes. For short safaris, we recommend visiting the Tarangire at its best, from August to October.

You will find below all the different periods and the features of the park during these months, so you can choose which is best for you.

From January to March

This is the wettest period of the year, during which you can be surprised by heavy downpours, despite clear and sunny weather conditions on other days. Temperatures range from 18° to 28° from January to March, during which time the landscape is lush and green due to regular downpours. The numbers of animal species present in this period are far from their peaks, with low animal sightings.

This period, regardless of landscapes with lush and verdant flora, is a very bad time to visit the area, since most of the animals will have already left the Tarangire, moving to other parks. There will still be a few examples of elephants, warthogs, cudus and a few animals that are difficult to spot due to the dense vegetation.

This is when the dry season begins, with very little rains. The vegetation also begins to dry up, with the tree species beginning to lose their leaves due to the drought, making it easier to spot animals such as elephants, zebras and cats.

From August to October

As we have mentioned repeatedly, this is the best time to visit the Tarangire, as there is an enormous concentration of animals around the river and adjacent marshes. Furthermore, the vegetation is sufficiently bare to allow for easy sightings.

November is a period of light rainfall after the dry season. Vegetation that had dried up due to intense droughts begin to thrive again. This period is not recommended, because the animals begin to move away from Tarangire Park, heading towards parks with more luxuriant pastures, having now consumed the food reserves of Tarangire.

Discover our Itineraries that include Tarangire Park