The Mamba Safari is a wonderful 9-day adventure and a memorable safari to admire the beauties of Northern Tanzania. Together with Safari Avventura you will visit Arusha National Park, Tarangire Park, Manyara Lake Park, Serengeti Park, Ngorongoro Conservation Area and Lake Eyasy, all of which are popular safari destinations.
Here you’ll get an up close look at animals of the savannah, such as lions, cheetahs and cudus, and take pictures of Tanzania’s beautiful landscapes. All of these with the assistance of an Arusha-based tour operator who will be your personal guide throughout this tour, including full board, private jeep use and select accommodation. So, are you ready to set off?

Arrival at Kilimanjaro and departure for Arusha

The first stop of the Mamba Safari is the arrival at Kilimanjaro Airport, one of the most famous places in Africa and the world, where you will be welcomed by the staff of Safari Avventura. Our guide will show you Tanzania’s warmth from the outset with a festive welcome. After a short briefing and light refreshment of local specialties, you can then choose to either move to your lodge or stay in the company of our staff, who will accompany you on a visit to the city of Arusha, bringing you into the very heart of Africa.

Dinner and overnight accommodation will be at the lodge, a truly romantic and evocative location, where you will wish to stay forever. 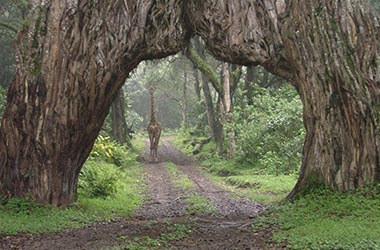 After a hearty breakfast on the morning of the second day, Francis will be waiting for you with your private jeep outside the lodge to begin your safari in one of the most incredible places in all of Tanzania, the Arusha National Park.

Despite being one of the smallest in Tanzania, Arusha Park is one of the most beautiful in terms of landscape. The park has a striking and varied shape, and has the Ngurdoto crater, the momela lakes to the east and the fascinating Mount Meru to the west. The Ngurdoto crater, also called Piccolo Ngorongoro, is surrounded by forest, while the inside of the crater is a swamp. The Momela lakes are shallow and characteristic for their bird varieties, among which, in particular, are spectacular flamingos. Arusha Park is rich in wildlife: you can certainly see zebras, giraffes, buffaloes, warthogs, baboons, water antelopes, hyenas and DikDik. You can also spot the occasional leopard, but you won’t find any lions or rhinos due to poaching.

You will enjoy a packed lunch amidst nature, and will be accompanied to the lodge for dinner and overnight lodging late in the afternoon.

Today we leave for the Tarangire National Park, about 2 hours away from Arusha. The Tarangire is generally the starting point of a long circuit of parks in northern Tanzania. The main feature of this safari park in Tanzania is the presence of African pythons and large baobabs, which make it a great attraction for millions of tourists every year. A large river flows through the park, providing a life artery for all wild animals. It is for this reason that the Tarangire is home to the Big Five, the five most renowned animals in southern Africa; lions, buffaloes, cheetahs, rhinos and elephants. You will see huge herds of elephants, wildebeests, antelopes, gazelles and sometimes even leopards and rhinos. The Tarangire is also ideally located for bird watching; lovers of the genus will be delighted by the sight of over 500 species, especially between October and May. You can also make night excursions by jeep in the area of Lolkisale on request. 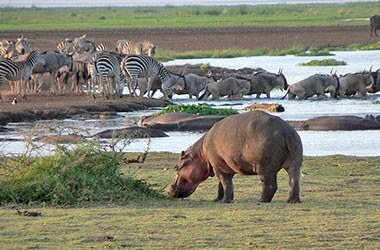 The safari continues on the fourth day with a tour of the Lake Manyara National Park. Ernest Hemingway described Manyara as “the most beautiful lake in Africa“. The park is located along the route to the Ngorongoro Crater and Serengeti National Park, and is the second oldest national park in Tanzania by date of founding, which took place in 1960. Its main attractions are the beautiful birds and lions, which you will also find lying on top of the tree branches. Many tourists visit the lake to see the African lions climbing on the acacia and fig trees. Another characteristic of the lake is the presence of numerous flamingos, which when observed from a certain distance, provides for various shades of pink. You will certainly find elephants, zebras, wildebeests, warthogs, antelopes and giraffes. This park covers an area of only 330 square kilometres, of which 230 square kilometres are occupied by the lake. It is also possible to encounter five different ecosystems here. The park is also inhabited by over 380 bird species.

Packed Lunch. Dinner and overnight accommodation at the lodge.

Visit to the Serengeti National Park

We leave for the famous Serengeti National Park after breakfast, a place where legend meets reality, and where nature’s beauty and sync can be perceived as in very few other places in the world. Here in the Serengeti thousands and thousands of animals, driven by the primordial rhythms of survival, constantly move in search of green pastures. The most numerous are the wildebeests; they are estimated at over a million specimens, and their migration makes for the main feature of the Serengeti Park.

The over 15000 square kilometres of the Serengeti is also famous for its predators, especially the lion, but also cheetahs, gazelles, hyenas, jackals, leopards and many others. The park also boast about 200,000 zebras, herds of elephants, antelopes, impalas, and warthogs. The concentration of these wild animals is higher from December to June, and relatively lower from July to October. The Serengeti is however deserving of a year round visit.

Dinner and overnight accommodation at a tented camp in Serengeti.

The Fauna of Serengeti Park

Here we are on this beautiful sixth day of the Mamba safari, the greatest adventure in Tanzania. We will spend the whole day after breakfast watching wildlife in the Serengeti National Park. Here you’ll find the most beautiful animals in Tanzania, which you will be able to see up close in all their majesty.

Packed lunch or lunch at the camp. 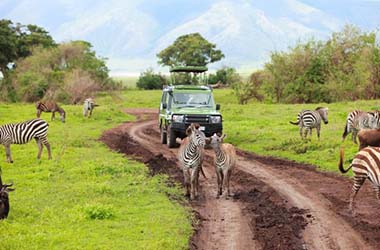 From Serengeti to Ngorongoro

We have now reached the seventh day of this Mamba itinerary in Tanzania, and there are still many things to see. We will continue with the sighting of wildlife after breakfast, first in the Serengeti National Park and then moving to the Ngorongoro Conservation Area. We will then visit the magnificent Ngorongoro crater later in the afternoon.

The Ngorongoro Crater is just one part of a very vast area of interrelated ecosystems that make up the Ngorongoro Conservation Area, which also includes the crater highlands and vast plains, prairies, woods and forests. Ngorongoro Conservation Area has been declared a UNESCO World Heritage Site. The crater is the most popular destination in all of Tanzania, and among the most fascinating in all of Africa. At about 20 km wide, it is one of the largest craters in the world. The concentration of fauna in the crater is impressive: there are over 30,000 large animals and a large number of birds that have settled in the area, thanks to the presence of lakes. You can see and photograph rhinoceroses, lions, buffaloes, elephants and many other animals in the park, whether predators or herbivores. 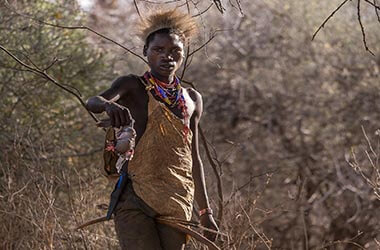 Of wild beauty, this lake is located at about 1000m, and is a warm and dry area where the Hadzabe live, a population that seems to have lived there for 10,000 years, and who still carry out the traditional practices of hunting and gathering. The Hadzabe, organized into small groups of about twenty individuals, thrive on hunting with bows and arrows and collecting wild fruits. Their way of life has remained unchanged for thousands of years, and seeing them is a truly fascinating experience. You can also arrange for an early-morning hunt with them. This is a real experience, not a faked or a staged for touristic purposes.

The region is also home to the Datogas, polygamous breeders from the Horn of Africa, who came to the region with their herds in search of pastures.

You will also visit a village where you will be able to observe the ancient production techniques of everyday objects.

Safari Avventura is also offering its customers the opportunity to eat at home with the family of our guide Francis, located in the village. You will savour the local cuisine, immerse yourself in the local reality and experience a day that will forever remain in your heart.

Trip to Arusha and return to home

We have come to the end of this wonderful journey that you will forever carry in your heart. Today you return home, but there is still time for one last trip to Arusha and a little shopping to buy souvenirs and gifts for friends who were not lucky enough to participate in this unforgettable safari in Tanzania. Should you still want to stay in Tanzania, you can buy the sea extension with its paradisiacal beaches of Zanzibar, Pemba and Mafia. In any case, a staff of Safari Avventura will be with you until your departure from Kilimanjaro airport.