7-day safari offer in the northern parks of Tanzania

By choosing the Elephant Itinerary, one of our most popular safari offers, you will immerse yourself in the unspoilt and wild nature of true Africa; you will encounter many different animals up close and be amazed by the magical views of the park and Tanzania as a whole. You will be accompanied by one of our Tour Operators, who will escort you through the most beautiful parks of northern Tanzania on board a comfortable Jeep fitted with power outlets, fridge with soft drinks and snacks, and a pair of binoculars. Our itineraries include: full board and select accommodations, as well as a local guide and use of a Jeep!

Are you ready to begin?

Additional services during your stay in Tanzania

7-day Safari in the Northern Parks: beginning at 2.088 USD

• The transfers mentioned in the program, with a Toyota 4×4 private jeep with sunroof;
• Transportations to/from the airport;
• Overnight accommodations in lodges and tent camps(6 nights);
• Admissions and activities in the parks;
• Professional guide;
• Full board in lodges, hotels and tented camp (including water during meals) + snacks, water and soft drinks in jeeps during the safari;
• AMREF Flying Doctors Medical Insurance;

• Airline tickets;
• Tips to guides and extras;
• Everything not specified in “THE PRICE INCLUDES”.

For more information, please contact us through the contact details listed at the bottom of the page; we will be happy to get back to you as soon as possible.

Arrival at the airport and departure for Arusha

Upon your arrival at Kilimanjaro (or Arusha) airport, our guide will welcome and take you to your lodge in Arusha.

Should you have the time, desire and energy, you can take a tour of the city, accompanied by our guide. Alternatively, you can unwind at the hotel. 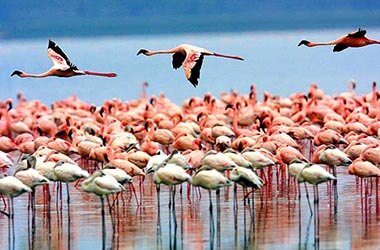 After breakfast, the safari continues with a tour of Lake Manyara National Park, one of Tanzania’s most biodiverse parks.

Covering an area of only 330 square kilometres, 230 of which are occupied by the lake, you can encounter five different ecosystems here.

The park is inhabited by over 380 bird varieties and a large number of animal species including elephants, buffaloes, zebras, giraffes, leopards, lions, baboons, hippos, antelopes, warthogs and many more.

We leave for the park early in the morning and return to the lodge by 18:00.

We will transfer to Karatu in the afternoon.

Dinner and overnight accomodation at Bougainvillea Lodge (or similar class)

Visit to the Ngorongoro Crater

We will head to the Ngorongoro Conservation Area after breakfast, one of the world’s most iconic safari sites, declared a UNESCO World Heritage Site in 1978 and an International Biosphere Reserve in 1981.

The Ngorongoro Crater, located at 2,200 meters above sea level, is the largest uninterrupted caldera in the world and one of Africa’s natural wonders, with some 30,000 large mammals living there all year round, such as buffaloes, lions, elephants, cheetahs and rhinoceroses, as well as many bird species, such as flamingos, eagles, buzzards, ostriches and hawks.

Permits for game drives inside the Crater are valid for up to 6 hours.

Lake Magadi sits in the centre of the crater, with shallow waters that tend to dry up during the dry season, and is the best spot from which to observe flocks of flamingos and crowned cranes, as well as a large number of herbivores, especially great numbers of wildebeests and zebras, who drink here, attracting the presence of lions and hyenas.

We leave early in the morning for the park and return to the camp at about 6:30 pm.

The photo Safari continues after lunch along the road from NCA to Serengeti.

Dinner and overnight accommodation at tented camp in Seronera.

We will visit the Serengeti National Park after breakfast; this extraordinary place where legend meets reality is the oldest and largest Tanzanian park, covering an area of 14,763 square kilometres, so much so that its name, of Masai origin, Siringet, means “Plain without borders”.

Never-ending plains await you, along with the great migration of herbivores, especially wildebeests and zebras, prides of lions, and other predators such as hyenas, cheetahs, leopards, jackals, crocodiles…

We leave for the park early in the morning and return to the lodge by 18:00.

Dinner and overnight accommodation at tented camp in Seronera.

We will continue our discovery of the extraordinary Serengeti National Park after breakfast.

Its boundless prairies are occasionally interrupted by bizarre granite formations – kopjes, in whose cracks often form small pools of rainwater, attracting several small animals, including large predators such as lions who love to lay in them or hide in wait of a possible prey.

The rivers provide a habitat for crocodiles, hippos and many other water animals, as well as leopards, which often bask in the branches of the umbrella acacia found here.
We will leave for the park early in the morning and return to the lodge by 18:00.
Packed lunch will be served at the park.
The photo Safari continues after lunch along the road from Serengeti to the NCA, continuing with another move to Karatu.

Dinner and overnight accommodation at the lodge

After breakfast, we head to Tarangire National Park for a fascinating game drive.
Here, the swaying sylvan savannah, dotted with majestic baobabs, many of which are over 2,000 years old, is home to the largest elephant population in northern Tanzania.
And it is absolutely stunning to watch the animals when the dust blows over the dry plains.

The park is home to the highest wildlife concentration on the continent during the peak of the dry season.

Departure for the park early in the morning and return to the lodge by 18:00
Packed lunch will be served in the park.
We return to Arusha in the afternoon.

Dinner and overnight a stay at Ilboru safari Lodge (or similar class).

Excursion to Arusha and departure for the airport

The last day of the safari will also be well organized, giving you the chance to have breakfast before you leave, and, if possible, a tour of Arusha market to spend one last time shopping and buying souvenirs for friends and family.

We will then take you back to the airport, to return to home with a heart full of memorable experiences.