The Conservation Area of Ngorongoro, also known as the Ngorongoro Conservation Area, is one of the world’s most famous safari sites, declared as a World Heritage Site by UNESCO in 1978 and as an International Biosphere Reserve in 1981. This is also where the protection and conservation of African wildlife was born in the mid-1950s after long years of poaching by white hunters.

Following an uphill road over the Rift Valley escarpment, you reach the Noduare Gate, where the mountain forest area surrounding the magnificent Ngorongoro Crater, a hotspot of the Ngorongoro Conservation Area, begins. This is an enchanting place to visit while safariing in Tanzania. The road to the top of the crater is steep, with its surrounding landscape reminiscent of Central African rainforests, thick and lush. The nature here is pristine. You can see euphorbia candelabrums, strangler figs, nuxies, and crotons thriving.

The Crater View Point is 2,216 m above sea level, from where you can enjoy the first breathtaking view of the vast crater of this ancient volcano, Lake Magadi and the Lerai forest, including the striking contrast between the bottom of the volcano and the steep walls that drop almost vertically. 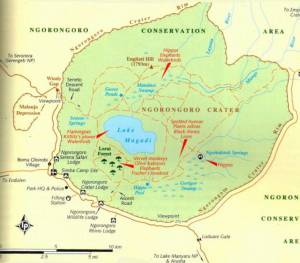 The road continues along the edge of the crater to the two entrance gates leading down into the crater.

Ngorongoro Crater was formed about 2.5 million years ago by a powerful explosion that created a depression, causing the volcano to sink, leaving behind a 19 km diameter crater with a surface area of 300 sq. km and 600 m in depth. These dimensions make Ngorongoro the largest uninterrupted caldera in the world, and one of the natural wonders of Africa with approximately 30,000 large mammals living in it all year round, such as buffaloes, lions, elephants, cheetahs, and rhinoceroses, as well as a variety of bird species – flamingos, eagles, buzzards, ostriches, and hawks.

In the centre of the crater is Lake Magadi, which has shallow waters that almost dry up during the dry season, and is the best place from which to observe flocks of flamingos and crowned cranes, along with a number of herbivores, especially a large number of wildebeests and zebras who drink here, attracting the presence of lions and hyenas. To the south of the lake is the Lerai forest, characterized mainly by yellow acacias also known as the fever tree, while the rest of the crater is covered with grasslands and small ponds hosting groups of hippos. The crater is also almost the only place in Tanzania where you can spot the rare black rhino, whereas there are no giraffes here.

Outside the crater are other areas contained in the Conservation Area, which are of considerable natural and landscape interest.

The north-eastern side of the reserve is home to the Olmoti and Empakai minor craters, where you can take beautiful walks (you must however be accompanied by an armed ranger and a local Masai guide, because besides herbivores, the presence of predators such as leopards cannot be ruled out, which, unlike other felines, can easily leave the Ngorongoro caldera).

It is also possible to meet groups of Masais grazing their numerous herds in the area, as well see their villages. The Masai are the only tribe allowed to live in the Ngorongoro Conservation Area, as they neither hunt nor feed on wild animals, but only on the animals they breed. This ethereal balance that has been created in the cohabitation between the Masai and wild animals is truly unique and based on a form of mutual respect that can hardly be fully understood by Westerners.

The western belt consists of the plains between Lake Eyasi to the south and the small lake Ndutu. They are the southernmost points of the vast plains of the Serengeti, and are particularly interesting in the months from December to February, when there is a large concentration of herbivores taking part in the great migration. Not far from these are the Olduvai Gorge, the last attraction before leaving the area to enter the Serengeti National Park. The gorges are linked to a series of excavations that have brought to light very important findings on various species of hominids dating back to over 3.5 million years ago, helping to shed more light on the evolution of man. Adjacent the gorges is a museum full of information on the excavations conducted and the history of evolution.

Check out all our safari tours that include stops in Ngorongoro and start now with us!