Arusha National Park is the ideal starting point of this spectacular route that will lead you to the discovery of typical African flora and fauna, as well as a search for the big five (5 must see animals during a photo safari: elephant, rhinoceros, buffalo, lion and leopard). The Park is named after the nearby city of Arusha, the second largest city in the country.

Despite being one of the smallest parks in Tanzania, Arusha National Park certainly deserves to be visited for its beauty and variety of landscapes, ranging from mountainous rainforests to freshwater and soda lakes, from the wooded savannah where acacia trees predominate to lowland and mountain prairies.

The altitude in the Park area varies from 1500 m to over 4500 m, resulting in significant biodiversity and an ideal habitat for a large number of animal species.

The park can be visited entirely by jeep, except for the climb to Mount Meru, which requires hiking for at least 3-4 days.

Located in the centre of the Park, Mount Meru is the second highest peak in Tanzania at 4566 m, with a lush rainforest at its base, above which stands out the peak of bare rock. 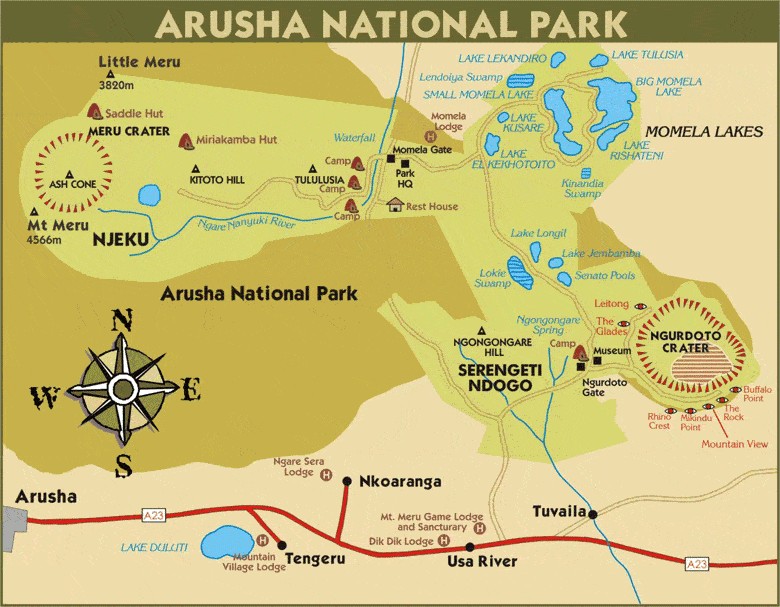 Mount Meru is an ancient volcanic cone that is now inactive, which was Tanzania’s highest peak in ancient times, losing part of its mass and altitude as a result of numerous explosions and eruptions. The beauty of its landscapes remains intact and varied, with huge bamboo forests covering the area up to about 3000 metres, from where green flowering meadows with buffalo, antelope and giraffe populations extend.

The area also boasts predators such as hyenas and leopards, including some 400 bird species and a large number of butterflies. For hiking enthusiasts, Mount Meru is considered a test of acclimatization before venturing on to Kilimanjaro. During the climb, you will enjoy spectacular scenery and a view of Kilimanjaro that is only about 70 km away.

On top of Mount Meru is a beautiful crater, 4 km wide and inside a small peak formed by the last volcanic eruptions, the Ash Cone (Cenere Cone). And on the eastern side of the slopes is the fascinating Ngurdoto crater.

Ngurdoto’s crater is a 3 km wide caldera so rich in fauna that it is also nicknamed “Little Ngorongoro”, in reference to the Ngorongoro Conservation Area. The Momela lakes, seven small lakes formed by successive eruptions and floods, are also part of this variegated ecosystem. They have shallow alkaline waters and attract a great variety of birds, particularly the elegant flamingo. The lakes are fed by underground water springs which have a different mineral composition, facilitating the growth of various algae that give each lake different colours and shades.

The park is home to a substantial number of large herbivorous mammals and predators, but there are no lions. This is probably why the park is rarely visited by tourists despite its proximity to the city, which is a great way to enjoy days immersed in nature in relative solitude.

To get to the other parks, we leave from Arusha along the well-maintained asphalt road that goes West. This is the area inhabited by the nomadic Maasai and their herds, whom we will begin to encounter from the outskirts of Arusha.

Discover our tours that include Arusha Park