African Lion: Appearance and Characteristics of the King of the jungle

The largest predator in Africa is the majestic African lion or pantheraleo, the second largest animal of the feline family that now lives mainly in the sub-Saharan area. The classification of this splendid specimen is rather complex, due to numerous minor subspecies.

Pantheraleo is a name that generally refers to lions, but which is increasingly identified with the African species, the largest population. There are two other schools of thought as well. The first school leans towards a macro-subdivision into two species, the leoleo (Linnaeus, 1758), which identifies African lions, and the leo persica (Meyer, 1826), which identifies Asian or Indian specimens.

The second school however prefers a much more specific classification with numerous lion subspecies: Pantheraleosenegalensis, Pantheraleonubica and Pantheraleomassaicus, depending on the area of prevalence. In this article we will discover the characteristics and details of a particular subspecies, that is the most common African lion, Pantheraleomassaicus (Neumann, 1900), also known as Masai lion, Lion of East Africa (or of Eastern Africa), Somali lion, or Abyssinian lion.

The Masai Lion now lives in three main areas: near Kilimanjaro National Park in Kenya, in the Masai Mara Wildlife Reserve (named after the Masai Tribe), and in Tanzania, particularly near the Serengeti National Park and Ngorongoro Conservation Area.

Renowned for its magnificent appearance, this King of the Jungle is famous in many civilizations as a symbol of power, courage and nobility. With some males weighing over 250 kg, they are the second largest cat on earth after the tiger. The male african lions are distinctive for their impressive mane, which enhances masculinity and reflects state of health.

The lion is one of the most famous and appreciated animal species, and is one of the animals that drive people to Tanzania to plunge into safaris. Its remarkable size makes it the largest predator in Africa and one of the animals known as Big Five. Some of its peculiarities are quite popular, such as the thick mane that changes from subspecies to subspecies.

The weight of Pantheraleo varies from 150 kg to 250 kg for male species, and from 120 kg to 182 kg for female species, which are considerably more slender, while the subspecies massaicus, typical of Tanzania, is slightly more slender with an average weight ranging from 145 kg to 205 kg for males and from 100 kg to 165 kg for females. The heaviest Masai lion ever found was a specimen near Mount Kenya. It weighed as much as 272 kg. 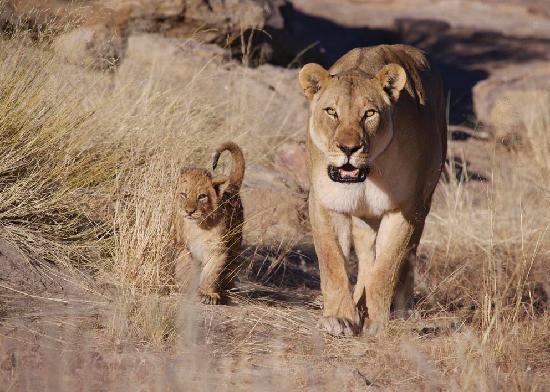 As already mentioned, the lion is the biggest predator, reaching up to 120 cm at withers.

The Masai lion is longer and less stocky than Asian subspecies, with an average length of about 2.5 – 3 metres, measuring from the tail. On the contrary, the dimensions for African lionesses are relatively smaller, reaching an average of 2.3 – 2.6 metres.

The most evident difference between the two subspecies – the African and Asian, excluding differences in height and weight that show the African lion as the heaviest and longest, thanks to its longer legs, is found in sexual dimorphism represented by the mane. The African lion has a more imposing mane than its Asian cousins, which is also less sparse. The manes of Masai lions are in fact more stripped and appear to be combed backwards.

It is actually difficult to accurately distinguish manes when talking about African lions, because they develop different types of manes based on their age and place they live in. And the mane is in fact their most famous feature. Manes develop with age and continue to grow even after the lion has reached sexual maturity.

The manes of these lions grow on average for about 4-5 years, which is why adult lions have manes that are not only longer, but also thicker than those of their younger counterparts. Age is however not the only factor influencing the appearance of the manes. Masai lions living in highlands and plateaus have very different manes from those living in warmer and wetter plains.

African lions have much longer and thicker manes in highlands above 800 metres, while species living in hot weather may even lack them.

Lifestyle and habits of african lions

We have already seen the places where it is most common to meet lions, namely the areas bordering Kenya, the Masai plain, and Tanzania, including the Tanga region. Lions, in fact, prefer life in the steppes and particularly arid areas such as savannahs. These places are particularly suitable for these majestic animals because they allow for camouflaging in the dry grasslands, which have the same straw colour as their fur.

The African lion is currently the most numerous, counting about 32,000 specimens, whereas there are only 650 Asian lions, as per a census carried out in 2017, with all of them concentrated and protected in Sasan-Gir National Park. 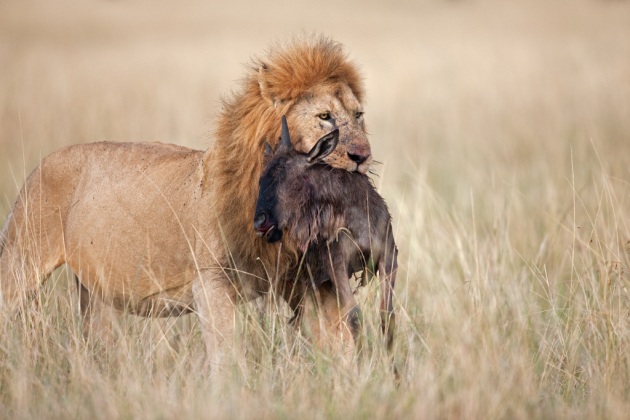 The diet of African lions is obviously very different from that of their Asian cousins, as both regions offer very different fauna. Masai lions are used to hunting in herds, and the animals that make up their diet are mainly: zebras, wildebeests and antelopes. The males almost never hunt, allowing the task for the lionesses. Male lions are in fact used to participate in hunting only when the herd decides to hunt a rather large prey such as giraffes and buffaloes.

Lions have the capacity to eat up to 30 kg of meat at once, and to sleep for over 20 hours straight after these sumptuous meals. But, as an average, they eat about 7 kg of meat per day for males and 5 kg for females.

Wildebeest make up more than half of a lion’s diet, and they are easy to hunt in the Serengeti, given the massive migrations. On the contrary, the specimens living in the areas of the Lake Manyara National Park are used to feeding on black buffaloes, as this is the most common animal in the area.

Lions have a common characteristic that differentiates them from all other felines, which is, they are the only ones living in groups. A group of lions is called a pride, and within it is an average of one or more male lions and about ten females with their cubs, for a total of up to 30 lions per pride. The lionesses are responsible for hunting and looking after their children, while the lions defend their territories from the males of other prides.

After turning three, the lions leave the herd in which they were born, and, together with other lions, conquer other prides, killing the lions that defended it. Lionesses on the other hand spend their entire life in the pride they were born in.

On average, lions live about ten years, threatened by both humans and other lions. A lion may live as long as 20 years in captivity, whereas it can reach the 12 – 14 years in the wild. This applies only to the male lions, which live a significantly shorter life than female lions as they are exposed to more risks, the greatest of which are attacks from male lions of other prides.

The lion is known to be the King of animals because it has no rivals in nature. No one could win a fight with a lion, an animal as elegant and majestic as it is ferocious. Despite this, the lion is still threatened by one dangerous animal: man.

Its habitat is constantly threatened by man, and it shrinks ever more as people need space to build houses, and plough farms and fields. Livestock breeding is a further problem, because the livestock being bred feed on the same pasture as the lion’s prey, resulting in a reduction in prey, forcing the lion to attack livestock on farm.

And the farmers, not being happy about this, take up their rifles to hunt the lions.