The African elephant, also known as Loxodonta africana, is one of the most popular and sought after animals during safaris in Tanzania, which thanks to its enormous size always manages to impress everyone. The African pachyderm is in fact the largest mammal in the world, along with two other members of the elephant family, namely the Indian and African Forest families.

We will now discover all the interesting facts and characteristics of this beautiful African animal, the largest of the African big five (together with the lion, buffalo, leopard and rhinoceros) and one of the most beautiful specimens of the Tanzanian wildlife, famous for its weight and record-breaking height, as well as for regrettable episodes such as poaching.

Appearance and overview of the African elephant

The African pachyderm is the largest land mammal in the world, surpassed in size only by marine cetaceans. Male elephants have an average length of 6-6.5m, with a height at the withers of about 3.2-3.5m, while female elephants are slightly smaller, reaching a maximum of 2.8m.

One of the most famous characteristics of these pachyderms are their enormous ears, which not only allow them to benefit from an especially advanced sense of hearing, but are also fundamental for heat loss.

Their fangs, from which is derived the name Loxodonta, meaning “oblique tooth“, are made of ivory which can reach lengths of up to a metre and a half in male specimens.

How much does an elephant weigh

The weight of a male African elephant ranges between 3800 and 5100 kg, although they can even reach as much as 8000 kg.  The female specimens, on the contrary, due to their much smaller size, can reach a maximum of 3500 kg.

A 1956 incident involving Jose Fenykovi, saw the hunting and killing of an African elephant in Angola, definitely the biggest pachyderm ever. It was up to 4.2 metres tall, weighing as much as 12,000 kg, 4 tonnes more than today’s average.

An elephant’s cry is known as “trumpeting”, meaning “gloomy noise“. 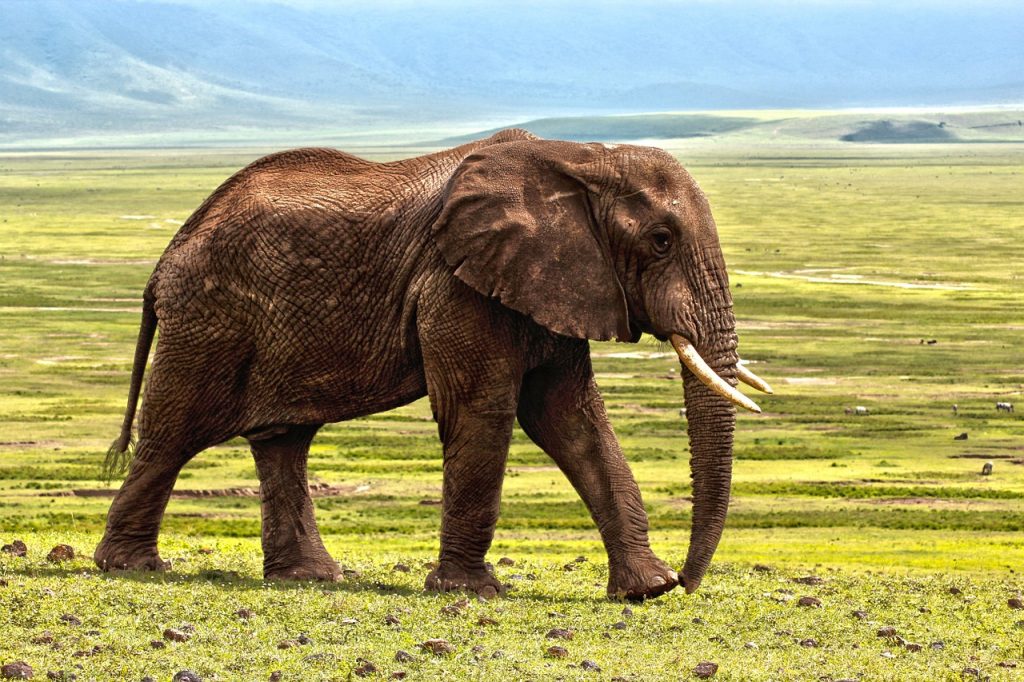 The differences between the African and Indian elephants

The most evident differences between the two species of elephants, the African and the Asian species, are mainly aesthetic and relate to weight and height. The African pachyderm is in fact taller and heavier than its Indian cousin, who has about the same size as a female African elephant.

There is also a difference in their earcups. The African elephant has larger ears than that of the Asian elephant. The same is true for the fangs, which can be barely visible in female Indian pachyderms.

Their skulls are also different, flattened at the back and curved for African specimens. Finally, their trunk has two protruding appendages.

Gestation is one of the most intriguing features about these elephants, as it is the longest of all mammals. Gestation for the African pachyderm lasts about 22 months, only coming to an end with the birth of a baby elephant, as twins are very rare.

An infant elephant is however anything but small and slender. Males weigh up to 120 kg, for a length of 1.2 metres, with an ability to stand on their feet after the first twenty minutes, only spending the first three years of their lives with their mothers.

Touring with Safari Avventura, you will often come across elephants living in the many parks we visit on our itineraries, such as Kilimanjaro National Park, Tarangire National Park and Arusha National Park.

The habitat par excellence of African elephants are the areas of Sub-Saharan Africa, especially the wooded savannah with a large presence of water sources, a great necessity for elephants.

The elephant is currently a vulnerable and endangered species, mainly because of man. Thanks to its mammoth size, the elephant is in fact unrivalled by any other animal, save for when it is still small. Poaching and elephant hunting have been major problems for hundreds of years, with elephants being killed for the ivory in their tusks.

It is currently not at risk of extinction, although its numbers have significantly decreased over time. It is now protected by the National Parks.

Should you also be curious to get to know the majestic African elephant up close, then we are waiting for you on one of our many safari itineraries in Tanzania, an unforgettable adventure to discover Africa.