The leopard (Panthera Pardus) belongs to one of the five panther subfamilies and is a predatory feline par excellence. There is a huge number of leopards in sub-Saharan Africa and in East African parks, such as in Tanzania. Some of these mammals, however, are also very common in sub-East Asia.

The leopards are part of the IUCN Red List, classifying them as vulnerable species as a result of the loss of their natural habitat and their consequent dispersion throughout the globe. Moreover, these felines have always been hunted for both their fur and the personal pride of hunters, especially in a hunting competition dubbed the Big Five Game.

Characteristics and description of the leopard

Compared to other felines, panthera pardus has relatively shorter legs and flatter hips than its kin, but this does not make it any less robust. The males can in fact measure 60-70 cm in height, whilst the females 55-65 cm.

Their body length varies from 90 to 190 cm, tail inclusive. This provides balance for the animal, both for walking and climbing trees, and for movements between them.

These significant differences between the male and female specimens are due to natural sexual dysmorphia.

Leopards have very large and very strong muscles, especially at the back, permitting them to jump and climb trees where they hide their preys from larger predators such as lions.

Although muscular, their limbs are short and end with wide and powerful legs equipped with pads that help them to move in silence and stealth, and with retractable claws that assist them in hunting.

Panthera pardus has the longest and sharpest claws to assist it in climbing. Its canines, on the contrary, are only about 6 centimetres long.

Leopards have large, rounded skulls, with snouts that are shorter than those of other panthers. Their necks are very short and muscular. They have very muscular jaws which they use for grabbing and transporting preys much bigger than them.

The feline has a round yellow pupil. Its nocturnal sight is six times better than that of humans and surpasses that of other predators. 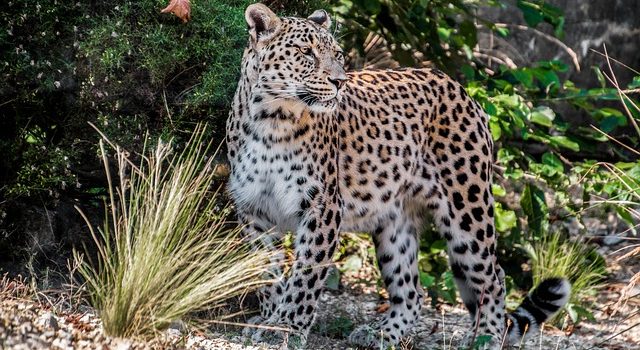 Leopard fur varies according to climate and place of growth. Their coat can take on various shades, from pale yellow to dark brown. Their chest, belly, throat and tail are white, as are the inside of their legs.

The fur on its sides and back has dark roses called ocellus. Their faces are also spotted. On the contrary, their legs are characterized by less defined stripes which, on the tail, may transform to actual rings.

These animals have short, glossy and thick, but soft, coat. The fur on their underside is, however, longer and softer than that on the rest of their body.

This super predator can easily adapt to any habitat type, which immediately becomes its territory. This can extend up to 400 km2 and includes one or two females.

It is mainly active in the evening, when it is easier to camouflage and act stealthily.

The panthera pardus hunts all kinds of animals, even those much larger than it. It can, in fact, kill animals weighing over 150 kg, except for tigers and lions, its only rivals. This feline’s mode of operation involves jumping around the neck of its preys and biting them, thus causing their death by suffocation. Thanks to its strength and agility, the leopard then climbs up a tree with its catch, where it can enjoy its meal far away from other predators.

Leopards, however, are not only predators. They too can be threatened by animals stronger than them. In addition to the lions and tigers, their enemies also include hyenas, wolves, lyacons, prairie dogs, crocodiles and bears.

It is one of only few large cats capable of climbing and descending trees with its snout facing the ground.

The leopard is a purely solitary animal that only begins to look for a mate during breeding season, which runs from January to February. The male stays with the female until shortly before the delivery and does not partake in family life. Gestation lasts a hundred days and the litters are usually of three to four specimens. The leopard pups will begin hunting after three months and will remain with the mother until the next litter (usually two years after the previous birth). The siblings will stay together for a few more months before separating.

Differences between the African and Indian leopard

The African leopard, or panthera pardus pardus, is the most common subspecies of leopard and occupies the entire African region.

The Indian leopard, or panthera pardus fusca, is, on the contrary, a species classified as close to extinction. It is found on the Asian continent and is continuously threatened by the progressive loss of its natural habitat and by poaching.

The largest of these two types of panthera pardus is the African leopard, even if only slightly. It is about ten centimetres longer than the Indian leopard.

The African leopard is also more experienced in climbing trees as it lives with predators such as lions and tigers. The Indian leopard, even though it lives in the Asian forests, has no one to compete with, becoming an apex predator.

There may also be differences in the fur of these two animals. The African leopard usually has a dark yellow coat but, depending on its habitat, it can take on cream or reddish-brown shades. The Indian leopard, on the contrary, has dark brown fur which is light red in its undersides. Both felines have black rosettes all over their coat.

Differences between cheetah and leopard

There are countless differences between cheetahs and leopards, yet many can still not tell these two felines apart.

Firstly, the two predators differ in appearance. As already discussed, leopard fur is covered with dark rosettes. The cheetah, on the contrary, has a coat covered in circular dots. The snout of the latter is covered with black stripes starting from under the eyes and reaching the mouth.

Their heads are also different: panthera pardus has a bigger and rounder skull with a smaller nose. The cheetah, on the contrary, has bigger nostrils, as it needs more oxygen for running.

Moreover, the claws of the cheetah are not as retractable as those of the leopard, giving it more grip during runs.

The cheetah is in fact the fastest in the world, reaching a speed of 93 km/h and maintaining this speed for almost 300 metres.

In addition to physical differences, the two are also very different in terms of behaviour and hunting.

Cheetahs rely on speed to attack their prey. Like the leopard, he too uses canines to kill its prey. It hunts during the day, when the environment is well lit. This is because this feline relies more on sight than on smell. It quickly consumes its prey after catching it, and therefore does not store or hide food.

The leopard, on the contrary, relies on camouflage for getting food and prefers to hunt at dusk. After capturing and killing its prey, it hides it in the trees, saving it for the future, when it can be consumed in peace, far away from other predators.

These two felines also have different habitats: leopards adapt easily and can live both in savannahs and wooded or rocky areas; cheetahs, on the other hand, prefer semi-desert and savannah areas. 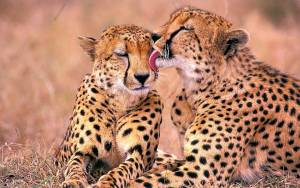 The saying “leopard spotting” refers to a phenomenon (social, political, etc..) that manifests itself irregularly on the territory and refers precisely to the spots on the fur of a leopard.

This expression also has a less known synonym that is found in various dictionaries: “leopard skin”.

Panther and leopard: the same animal

Did you know that there is no such thing as a Black Panther? The Panther is, in fact, synonymous with leopard.

This feline is nothing more than a panthera pardus affected by a form of melanism, due to the mutation of a dominant gene.

The melanic leopard still retains its typical rosettes, but they are hidden by the dark pigment of the melanin.

Melanic leopard is the most common form of black panther in captivity and has been bred for generations.

It is weaker than a leopard and is also smaller in size. Despite this, they are very skilled at hunting and can kill preys even heavier than them, up to 500 kg.

Melanic jaguars are more common in the wild, but some panthers have often been sighted in Asia, especially in Chinese forests.