The black rhinoceros (DicerosBicornis), or hooked rhinoceros, is a perissodactyl mammal of the African flat regions, and is most common to the areas of Botswana, Kenya, Cameroon, South Africa, Zimbabwe, Namibia, Malawi, Mozambique and, of course, our beloved Tanzania. Its size and aggressiveness have earned it a place in the Big Five, Africa’s five largest animals, and it is one of the most beautiful animals to watch on a safari in Tanzania.

Although its name is reminiscent of the colour black, this name was actually given for quite a different reason. The white rhinoceros got its name because of a poor translation of the word wyd, which means wide in Afrikaans, and not white as the English thought. This is why rhinoceroses are distinguished by colour and not by size. 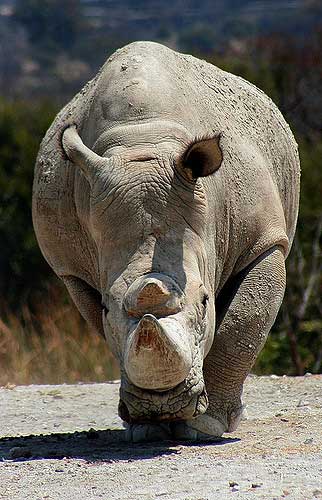 The hooked rhino is quite a unique specie. Its height ranges from 140 cm to 180 cm at the withers (i.e. up to the shoulders), with a length of about 3.5 m. An adult male can weigh up to 1400 kg, while an adult female weighs about 100 kg less than the male, while still maintaining the same size.

The DicerosBicornis, as you can guess from the scientific name, has two horns. The first horn is also the most extended in length, and can reach 140 cm. The second horn is smaller and flatter. In some exceptional cases, a third horn may even emerge, which will be very small.

The horns of the African rhinoceros are made of keratin and serve many functions: they are used for defence and protection, they intimidate enemies, and they are very useful for feeding. Thanks to these horns, the black rhinoceros can dig for water and roots, as well as break the branches of the shrubs.

Another important feature is their ears: they are mobile and allow them to hear at great distances. Moreover, they are essential for their survival, as these animals do not have good eyesight, and must therefore rely mainly on hearing and smell to perceive the presence of any predators.

The upper lip of the black rhinoceros is triangular and prehensile, as it must reach leaves and tear them off their tree.

Their armour can be of different colours, from brown to dark grey. They are thick and rough because they are formed by many layers that help the animal to protect itself from thorny shrubs typical of its natural habitat. Their body is also full of parasites like fleas and ticks that serve as food for birds such as buphagus and egrets that often stand on the backs of rhinos, preparing to feast.

Difference between black and white rhinos

The differences between these two species of rhinoceros are several and rather evident.

To begin with, they differ in size. If the adult black rhino can weigh up to 1400 kg, an adult white rhino will weigh around 2400 kg.

Black rhinos are thinner, smaller and more compact than their counterparts which are wider with barrel shaped bodies.

White rhinos’ have flat backs, with a small hump protruding towards the end. The backs of the black rhinoceroses, on the other hand, are curved.

Their snouts are completely different too, and this is because of the difference in their diets:

The black rhinoceros, as already mentioned above, feeds on foliage of bushes and low trees. That is why it is used to keeping its head high, consequently giving it stronger neck muscles than the white rhinoceros. Furthermore, their mouths are triangular in shape with prehensile lips for detaching leaves from branches.

The white rhino, on the other hand, feeds on grass. Its snout is therefore longer and its eyes smaller than that of the black rhino. Its mouth is rather square and not triangular in shape: its lips are large, flat, and very muscular, suitable for ripping grass from the ground. Should it sense a threat, the white rhino remains with its head down and uses its hearing to save itself.

Their ears are also a distinctive feature to help tell the species apart: the white rhino has tall tubular ears that can be moved individually, and uses them as satellites. Like all rhinos, its eyesight is not very good, and its nose when pointing towards the ground in search of food cannot sniff out predators.

The black rhinoceros, on the contrary, can rely on its sense of smell and on its sight for surviving its natural enemies, which is why its ears are smaller and round.

The anterior horn of the white rhinoceros is longer and tapered than that of the black rhinoceros, while the reverse is true for the second horn.

Preservation and threats: the risk of the extinction

Black rhinoceroses were once the most common rhinoceros species for much of the 20th century. There were hundreds of thousands of specimens in Africa in 1900.

That number dropped significantly, as a result of poaching and the progressive destruction of their habitat, to 2,500 in 1990.

Some specimens were taken to zoos in the USA, where they easily adapted to the habitat and captivity.

The International Union for Conservation of Nature recorded only 10 specimens of West African black rhinos (DicerosBicornisLongipes) in 2006, and they were declared experimentally extinct in 2011.

The other subspecies of black and white rhinoceros are still at risk, despite the construction of sanctuaries and nature reserves where they can live in peace, far from predators and hunters.

The only type of African rhino that seems to have been saved from extinction is the South African white rhino.

But what has caused these creatures to drastically reduce in the ecosystem?

A neglected factor is that of predators who, en masse, have been hunting down rhinos for several years without control. Particularly lions!

Rhinoceroses are herbivores that feed mainly on foliage. There have been increases in the percentage of iron in plants, due to pollution and the progressive destruction of natural habitats, and although the rhinos have managed, through evolution, to learn to ingest as little iron as possible, this still creates problems for their liver, spleen, and small intestine. This is a problem not only for rhinos in nature, but also for rhinos kept in captivity.

Poaching has also put a severe strain on the survival of DicerosBicornis, who are sought after for their horns. Hunting for black rhinos has been a widespread phenomenon since ancient times, particularly by the Asians, and Africa has seen its worst moment with the establishment of the Big Five Game.

Rhino horns were used in traditional Chinese medicine, and several herbalists argued that it was useful in waking up the sick from coma, performing exorcisms, and increasing fertility in men and women.

Poaching increased further in 1970, due to the continuous demand for horns, which were used in making Janbiyas, an ornamental dagger used by young men over the age of 14 in the Middle East.

If the question is, are black rhinos extinct? The answer is no.

Despite being threatened and highly endangered, Black Rhinoceros are still not extinct, and number almost 5,000.

Unfortunately, a subspecies of the DicerosBicornis, the western black rhinoceros, has become extinct. This type of rhinoceros was found in Sudan, Chad, Cameroon, Niger and Nigeria. Confirmation of the disappearance of DicerosBicornisLongipes was made in 2011 by the International Unit for Conservation of Nature.