Lake Natron, with the nearby Ol Doinyo Lengai volcano, is a pristine, rugged and particularly fascinating place that offers you the chance to experience enchanting excursions outside the most touristic routes.

It is a 60 km long alkaline lake, located north-east of the Ngorongoro Conservation Area, with shades ranging from white to pink and brown, depending on the time of year, offering one of the most beautiful views during safaris in Tanzania. Its size, like its colour, also varies greatly throughout the year, with its water shrinking so much during the dry season that it reveals large areas of soil covered with a thick salt crust.

The reason for this is because the waters of Lake Natron are formed by some underground springs originating from Ol Doinyo Lengai with very high levels of salinity, and also due to low rainfalls of under 400 mm per year, which is insufficient to compensate for the high evaporation caused by the heat. The lake’s excessive salinity makes it impossible for most animal species to thrive, with the exception of minor pink flamingos (lesser flamingo), which gather here every year between August and October in huge flocks (there are about 2.5 million of them) and nest.

The lake is their ideal habitat both for the safety of their nests from predators, who are unable to reach them on the expanses of salt and mud reaching 50°, and for the high presence of the spirulina algae they feed on, giving their characteristic colour.

Lake Natron and the surrounding environment 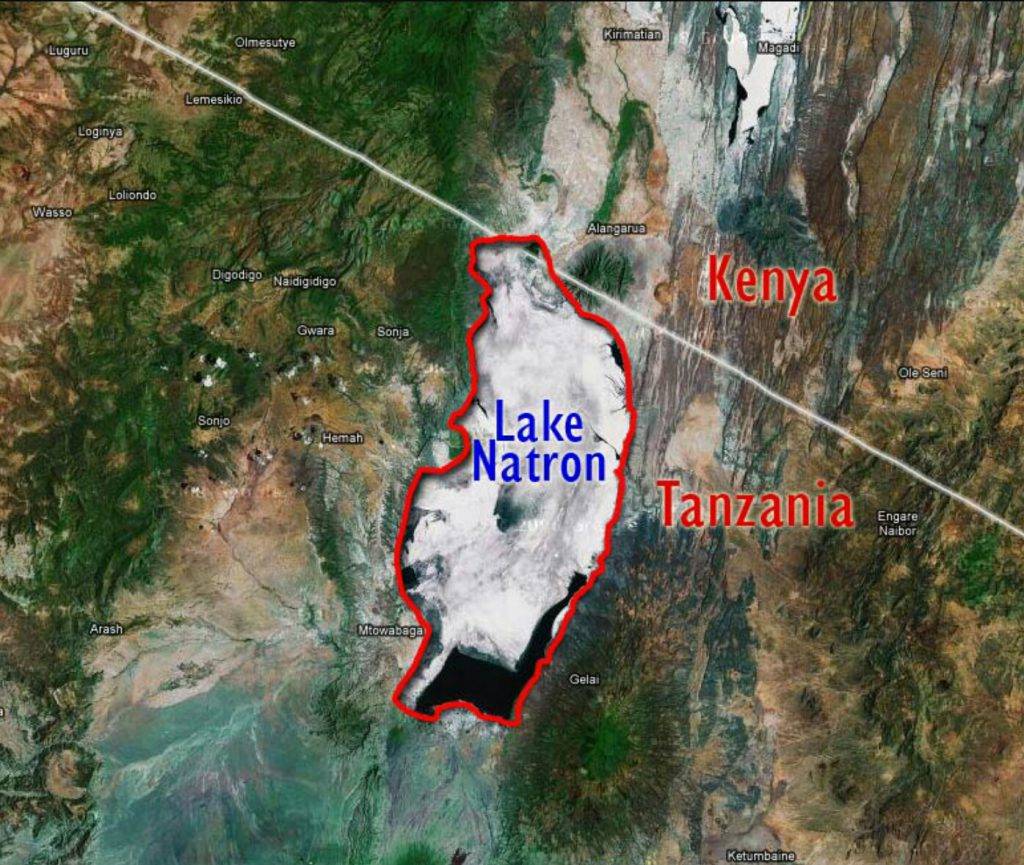 Just before reaching the lake, you can admire on the left the perfect cone of the Ol Doinyo Lengai volcano, “Mountain of God“, sacred to the Masai people who climb its slopes to bring offerings and propitiate the favours of the divinity who dwells in the volcano. Ol Doinyo Lengai is the only active volcano among the many that are found in this part of the Rift Valley, and is very special, almost unique. It is in fact the only volcano in the world that erupts sodium carbonate, a very fluid lava that reaches temperatures much lower (about 500° C) than the more than 1,100° C of normal basaltic lava.

The sodium carbonate, which does not glow during the day, is black immediately after spill, quickly turning white by chemical reaction on contact with rainwater, resulting in a shimmering soft powder, creating an illusion of a crater covered with snow. The erupted lava only turns red at night, reminiscent of the classic image of an erupting volcano. The volcano rises up to 2890 m above the flat salt surface of Lake Natron, and its 1,000 m altitude difference from the point where you leave your car to the summit can be hiked. The ascent takes from a minimum of 4 hours, depending on your level of training, and is quite challenging in the final stretch, owing to the steepness of the slope.

Once you reach the summit, however, you can enjoy an exciting experience, and it will also be worth spending a night camping in the crater to have a greater chance of witnessing an eruption and enjoying the nightly images of incandescent lava. Descending from the volcano, just before arriving on the southern shores of Lake Natron, you will encounter the very beautiful Ngara Sero gorges, where you can also take a refreshing dip.

The route that climbs north-west to Klein’s Gate, which marks the north-eastern entrance of the Serengeti National Park, crosses several Masai villages, which are particularly interesting to visit for those wishing to see life in a real Masai village, and not one built for tourist use and consumption, as in Ngorongoro. It is our goal during our safaris in Tanzania to ensure that the explorers we accompany live and discover the real Africa.

Climbing up the Rift Valley escarpment on a terrain of large stones interspersed with crevasses; you arrive at Loliondo, a place with lush vegetation in contrast to the aridity of the surrounding territories. The area around Loliondo is of particular interest during the period between October and December, when most of the herbivores taking part in the grand migration pass through it, marching towards the southern plains of the Serengeti.

The Lake that keeps Animals Petrified

As already mentioned earlier, Lake Natron has a unique characteristic: its high alkalinity. This characteristic makes it a deadly lake for hundreds of different species, which entering into the lake are likely to stay petrified.

The phenomenon is caused by the hydrated sodium carbonate, known as Natron, which in the past was used for embalming, and which transforms the waters of the lake into a kind of substance similar to ammonia, with a pH between 9 and 10.5. Upon contact with the waters of the lake, the minerals transform the animals into rock, trapping them forever.

Discover our safaris including Lake Natron