A 7-day safari to admire the beauties of Northern Tanzania and live the unforgettable experience of the huge migration of herbivorous animals (especially wildebeest, but also zebras and gazelles) that in this period move in search of food from the Ngorongoro Reserved Area to the Serengeti National Park.

The offer begins at 2500 USD per person

• The transfers mentioned in the program, with a private jeep;
• Transfer to/from the airport;
• Overnight stay at the lodge and tented camp
• Entry and activities in the parks;
• Professional guide;
• Full board + snacks and soft drinks during the safari;
• AMREF Flying Doctors insurance.

For further information, please contact us at the contact details listed at the bottom of the page; we will be happy to get back to you as soon as possible.

Arrival and departure for Karatu

Upon your arrival at the Kilimanjaro (or Arusha) Airport, our guide will welcome and take you to the lodge in Karatu, the ideal area to begin your visit to the Ngorongoro Conservation Area.
Dinner and overnight accommodation at the lodge

After breakfast, we will visit the Ngorongoro Conservation Area, one of the most famous safari destinations in the world, declared a World Heritage Site by UNESCO in 1978 and an International Biosphere Reserve in 1981. The Ngorongoro crater (permits for game drives inside the crater are valid for up to 6 hours) is the centre of attraction. Located at 2,200 meters above sea level, it is the largest uninterrupted caldera in the world, and one of Africa’s natural wonders, hosting about 30000 large mammals all year round, such as buffaloes, lions, elephants, cheetahs and rhinoceroses, as well as several bird species: flamingos, eagles, buzzards, ostriches and hawks. At the centre of the crater is Lake Magadi with its shallow waters which tends to almost dry up during the dry season, and is the best spot for watching flocks of flamingos, and crowned cranes, as well as several herbivores, especially a large number of wildebeests and zebras who drink here, attracting lions and hyenas.

After visiting the Crater, we will head towards Nolutu.

Dinner and overnight accommodation at the tented camp. 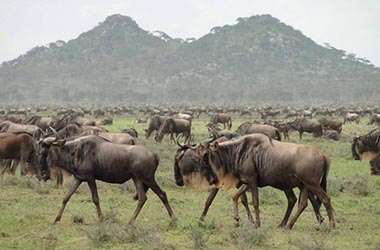 We will begin our visit to the green plains of Ndutu after breakfast, where the herbivores give birth to their young and stay there until they are weaned. This enchanting place, which during the dry season is an arid and semi-desert, is transformed with the coming of the rains, becoming lush and very fertile, with abundant short grasses, rich in minerals that are extremely important during breastfeeding.

This area, which has two salt lakes with marshlands around them, is home to a good number of animals all year round. However, the number of carnivores and predators increase exponentially during the migration period, intensifying the presence of lions, vultures, hyenas, cheetahs, and jackals.

The absence of trees and bushes means that it is very easy to spot attacks by predators.

Dinner and overnight accommodation at the tented camp in Ndutu. 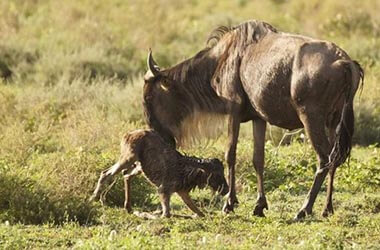 From Ndutu to Serengeti Park

After breakfast, we will continue our tour of Ndutu, surrounded by pristine nature and a huge amount of animals.

Coming to the end, we will head north to reach Serengeti Central, in Seronera.

The Serengeti National Park is a unique place where legend meets reality. It is the oldest and largest park in Tanzania, covering an area of 14,763 square kilometres. It is so large that its name of Masai origin – Siringet, means “Plain without borders”.

Dinner and overnight accomodation at tented camp in Seronera.

We will be visiting the Serengeti Park after breakfast. Endless plains await you in this park that is home to a great variety of animals, which, in this particularly fertile season, do not congregate around the rivers, but are scattered throughout the area. You will encounter herbivores, prides of lions and other predators such as hyenas, cheetahs, and jackals; as well as leopards that often bask in the branches of the umbrella acacias that grow here.

Dinner and overnight accommodation at the tented camp in Seronera.

The fauna of Serengeti Park

After breakfast, we will continue our discovery of the extraordinary Serengeti National Park, moving towards the centre of the Park. The boundless prairies are occasionally interrupted by bizarre granite formations – kopjes, among whose cracks often form small pools of rainwater, which attract many small animals, but also large predators such as lions who love to lay on them or hide in ambush, awaiting a possible prey. The tour will then head towards the southern part of the Serengeti, where you will again encounter the migration, and then continue towards the Ngorongoro Conservation Area, until we reach Karatu.

Dinner and overnight accommodation at the lodge in Karatu.

One last Trip and departure for the Airport

The last day of the safari will also be well organized. After breakfast, if possible, we will visit the city and take a trip to the Arusha market to do some shopping and to buy souvenirs for friends and family. After that we will accompany you to the airport, to return home with a heart full of memorable experiences.