During this special safari in Tanzania, you will get to experience 7 Days of safari to admire the beauties of Northern Tanzania, discovering the Great migration of herbivores, the most extensive migratory phenomenon in the world, a real spectacle for the eyes.

The offer starts at 2.479 USD per person

• The transfers mentioned in the program, with a private jeep;
• Transfer to/from the airport;
• Overnight stay at the lodge and tented camp;
• Entry and activities in the parks;
• Professional guide;
• Full board + snacks and soft drinks during the safari;
• AMREF Flying Doctors Insurance.

For more information, please contact us through the contact details listed at the bottom of the page; we will be happy to get back to you as soon as possible.

Arrival and departure for Karatu

Upon arrival at the Kilimanjaro (or Arusha) Airport, our guide will welcome and take you to the lodge at Karatu, the ideal starting point for your visit to the Ngorongoro Conservation Area.

Dinner and overnight accommodation will at the lodge.

After breakfast, we will visit the Ngorongoro Conservation Area, one of the most famous safari destinations in the world, declared a World Heritage Site by UNESCO in 1978 and an International Biosphere Reserve in 1981. The Ngorongoro crater (permits for game drives inside the crater are valid for up to 6 hours) is the centre of attraction. Located at 2,200 meters above sea level, it is the largest uninterrupted caldera in the world, and one of Africa’s natural wonders, hosting about 30000 large mammals all year round, such as buffaloes, lions, elephants, cheetahs and rhinoceroses, as well as several bird species: flamingos, eagles, buzzards, ostriches and hawks. At the centre of the crater is Lake Magadi with its shallow waters which tends to almost dry up during the dry season, and is the best spot for watching flocks of flamingos, and crowned cranes, as well as several herbivores, especially a large number of wildebeests and zebras who drink here, attracting lions and hyenas.

We then head for Seronera after visiting the Ngorongoro crater. 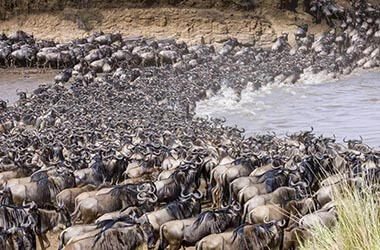 Serengeti Park: from Seronera to the North of the Park

We head to the north of the Serengeti National Park after breakfast, to discover the world’s largest extraordinary migratory phenomenon.

Every year, about 2.5 million herbivores, mainly wildebeests and zebras, travel about 800 km in search of food and water. They head north of the Serengeti during the dry season, concentrating along the Mara River. The Serengeti is where legend meets reality, and is one of the oldest and largest parks in Tanzania, covering an area of 14,763 square kilometres, to the point that its name, of Masai origin, Siringet, means “Plain without borders”.

Dinner and overnight accommodation at tented camp, North of the Serengeti (near the river Mara). 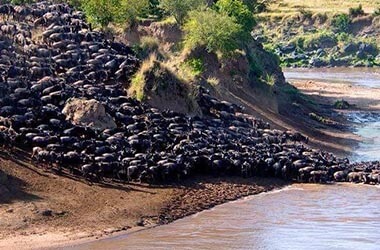 After breakfast, we head towards the Mara River, following in the trail of the migration.

You will be surrounded by an immense expanse of animals, and will be able to see the spectacular crossing through the Mara river ford, a great river that the animals have to cross, where the biggest threat to them are the huge crocodiles. You will also find numerous hippo families here, including herbivores and predators: lions, cheetahs, hyenas, etc.

Dinner and overnight accommodation at tented camp in the North of Serengeti (near the Mara river). 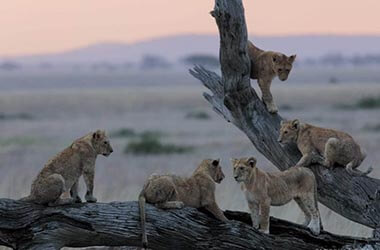 Serengeti Park and its Fauna

We continue our exploration of the extraordinary Serengeti National Park after breakfast, moving towards the centre of the Park. The boundless prairies are occasionally interrupted by bizarre granite formations – kopjes, among whose cracks often form small pools of rainwater, attracting lots of small animals, but also large predators such as lions who like to lie there or hide in ambush of a possible prey. Along the river are several circuits where you can see crocodiles, hippos and many other animals that come to drink, as well as leopards that often bask in the branches of the umbrella acacias present here.

We then begin our return journey, traversing the Ngorongoro Conservation Area once again, until we reach Karatu.

Dinner and overnight at the Lodge in Karatu

We head out to the Tarangire National Park after breakfast for a fascinating game drive. Here, the swaying sylvan savannah, dotted with majestic baobabs, many of which are over 2,000 years old, is home to the largest elephant population in northern Tanzania. It is absolutely amazing to watch the animals after the dust blows over the dry plains. The park is home to the highest density of wildlife on the continent during the peak of the dry season.

We then return to the lodge in Arusha after visiting the park.

Dinner and overnight accommodation at the Lodge

One last Tour before you head to the airport

The last day of the safari will also be well organized. After breakfast, if possible, we will visit the city and take a ride to the Arusha market to do some shopping and buy souvenirs for friends and family. We will then accompany you to the airport, to return home with a heart full of memorable experiences.